The most complicated logistic to deal with while planning our move was how to get Georgia on the island.

Yes, there were other issues with Georgia that we had to address, such as getting a license from the Bahamas and a health certificate from a US vet, but that was easy stuff, mere paperwork.

But getting her physically on to the island was a whole other matter:

1.  She's taller than the tallest crate allowed by the airlines.

2.  She can't ride in the cabin on any commercial flight because she would stick out into the aisle.

3.  Even if we could get her into a smaller crate, no airline allows "checked" pets on flights coming into Nassau, and the puddle jumps that go directly to Eleuthera don't have a compartment where you could "check" a pet.

5.  We could rent a boat:  Six hours of pounding away on the waves with a chicken dog? Not so much. And expensive. Nasty and costly.

6.  Jerry could bring her over on a ferry that would require three stops, an overnight, and a large portable kennel. Again...no.

Jerry contacted a fellow AF pilot friend, Mark, who happened to live in Florida and had a plane large enough to hold Jerry (who is huge) and our dog (who is dog huger).

When Jerry explained our tough situation, Mark and his wife, Sandra, offered to fly Georgia over for us! 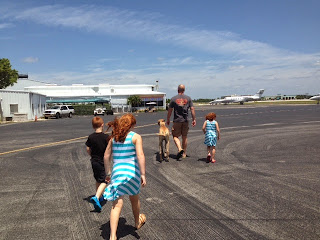 On the Saturday of The Move, we met up this wonderful and fabulously generous couple at the exec airport in Fort Lauderdale.

Not only were they willing to fly Georgia over, but because Mark and Sandra often fly their own dogs, they knew how to keep Georgia calm and keep her stress level to a minimum.

It was a beautiful day to fly!

Once we found Josh after losing him at the airport (long story), the kids and I said goodbye to our furriest family members and watched them head off to the plane. 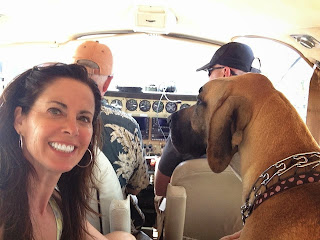 Here's Georgia with her new best friend, Sandra. Thanks again for being such an awesome dog whisperer! 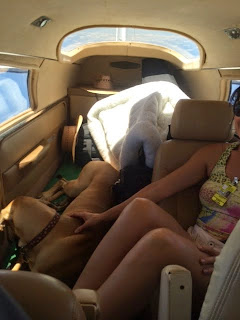 Despite all of my over anxious stress about possible mid-flight disaster, such as.....

And Georgia did well, too. In fact, she slept most of the way.

After a quick hour flight, Jerry, Georgia, and our friends made it to our new adventure.

The kids and I would meet up later. Much later that day. But make it we would!

And if you're ever in the greater Sarasota, FL area and need a realtor, check out Sandra's Facebook page:  https://www.facebook.com/SandraLaFlammeRealtor

We Are Here, and Some of Our Stuff


Moving day has come and gone and we are here on the island!  It's been over five years in planning, and even more in dreaming, but it's finally here!

Along the way, there were 28,827 details that needed decisions and action. One was shipping our few remaining household goods to the island. 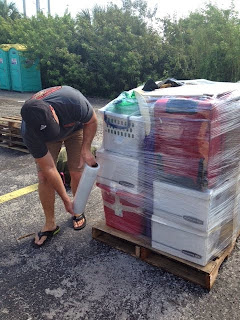 You bring the stuff. We build the pallets, and they ship it over. 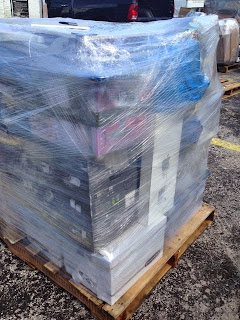 Jerry shipped out three pallets a few weeks ago, and we have already received them and paid the import taxes.

To ship a pallet, you stack the stuff up, maximum of 8-9', then wrap approximately 1,454 feet of shrink wrap around your goods. And tape. And prayers. 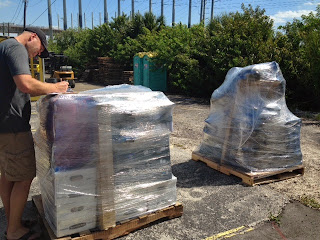 These were the last two pallets of household items. We also shipped Jerry's truck and the boat on its trailer. We have received those also, and paid the (huge!) import duties.

The stuff goes on the boat on a Tuesday or Thursday, and you get it 2-3 days later on the island.

Import fees are different for everything. Electronics, books, kids and baby stuff, and a bunch of other things are free to import. Tools, bikes, paper products, new items like clothes and shoes, and most other things are taxed anywhere from 25% to 50% of the items value.

Trucks and cars are 65% of the value, including the cost of shipping.

How do they know the value?

For household items they use eBay. The eBay rate is how they determine value.  For vehicles, they use "Bluebook" value. Or a completely made up number.

Also good to know, is that a dirty truck gets a lower value than a clean one.

We used a customs broker so the process was fast and easy. They overvalued the truck, but way undervalued the goods so it was a give and take.

I have my stuff. Most of it. The rest we will pick up tomorrow.

There's something awesome about having your own stuff.

Home is not the structure, it's the people, and to a small extent, the stuff inside. 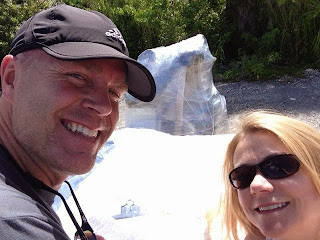