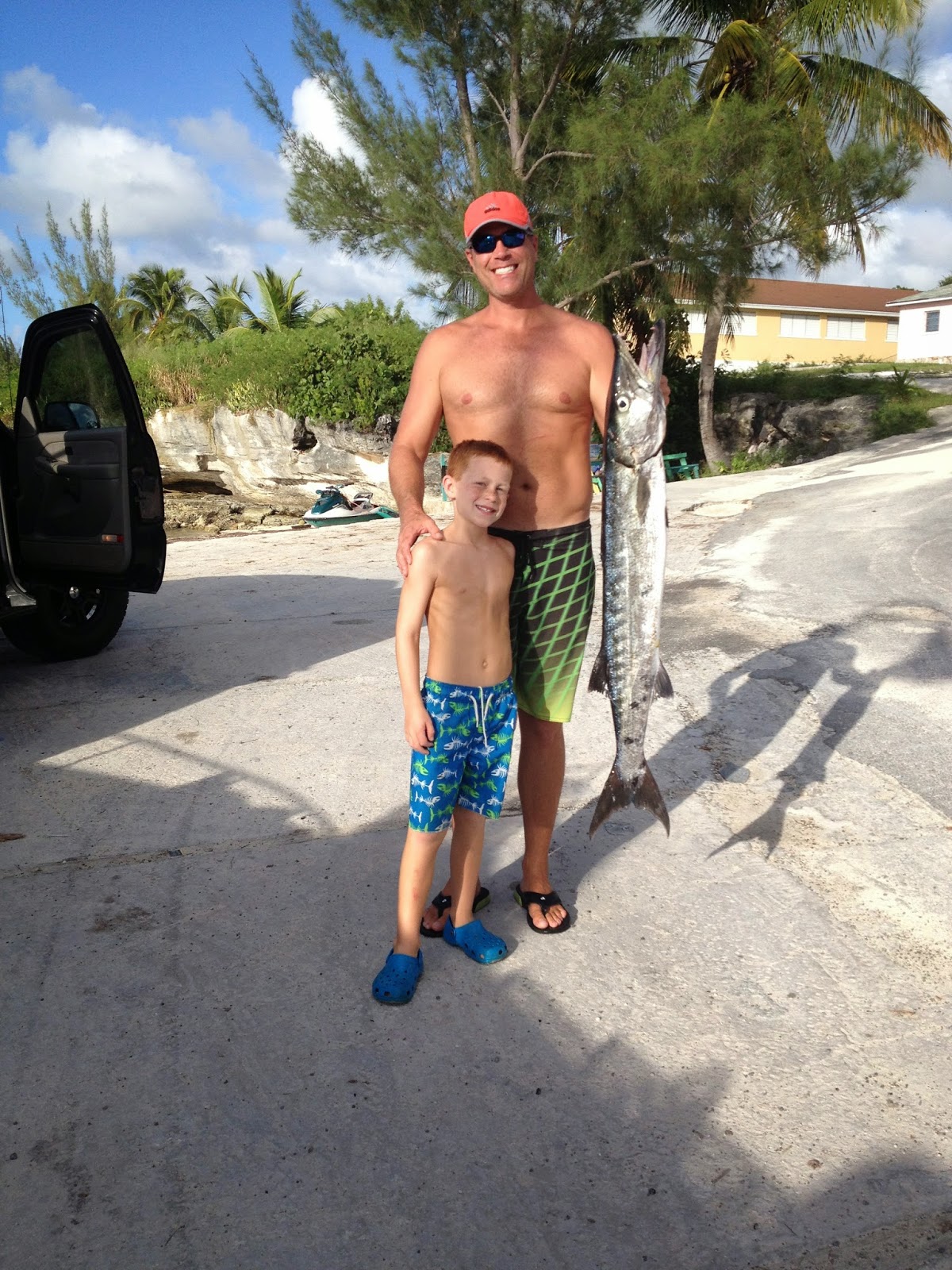 This is what we do.  We fish.  Not with a pole but usually with a spear and a Hawaiian sling.  What do we shoot?  Things that we eat.

Except this big 'ol barracuda.  We don't eat barracuda because of the insanely high levels of mercury typically found in these hunting masters.

But sometimes Jerry will shoot one anyway.  Especially when a five foot long cuda keeps swimming around the children.  Then it has to go. 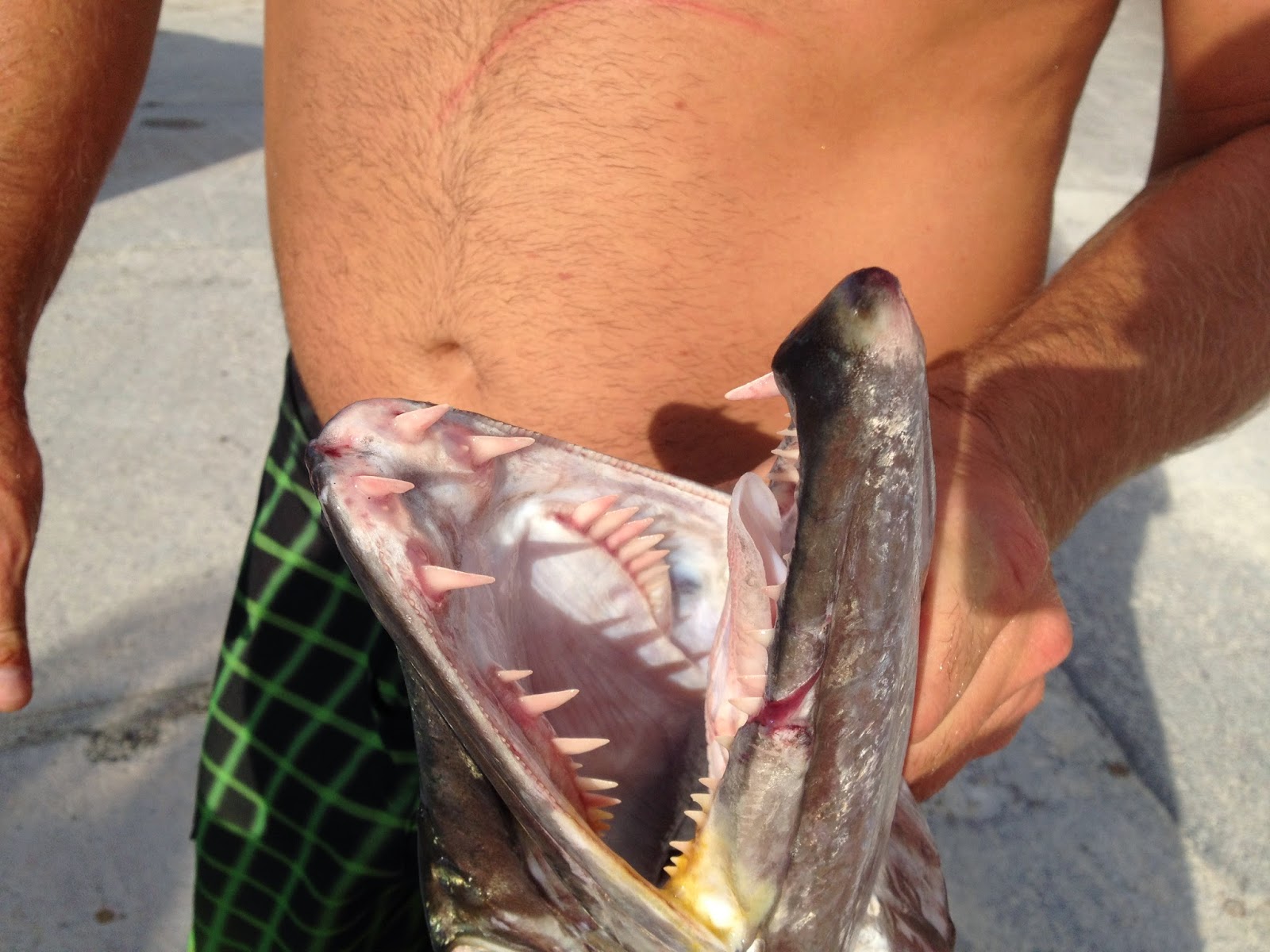 You can imagine that it's a bit risky to shoot one of these things.  They are impossibly fast, and have nasty attitudes.  If you don't make a good shot, that thing is coming back for you.  So Jerry had help from two local dudes we often go fishing with (with whom we fish).  Three giant guys, one giant angry fish.  It took three spears and a LOT of girly screaming (from the men as the cuda tried to eat them in revenge) to get that thing in the boat.

But only after it escaped a few times and had to be shot again, and again, was it manhandled into the boat where the kids and I tried desperately to stay away from those teeth as it thrashed in the throws of death.

When we got to town, we gave it to some local friends.  They ate well that night. 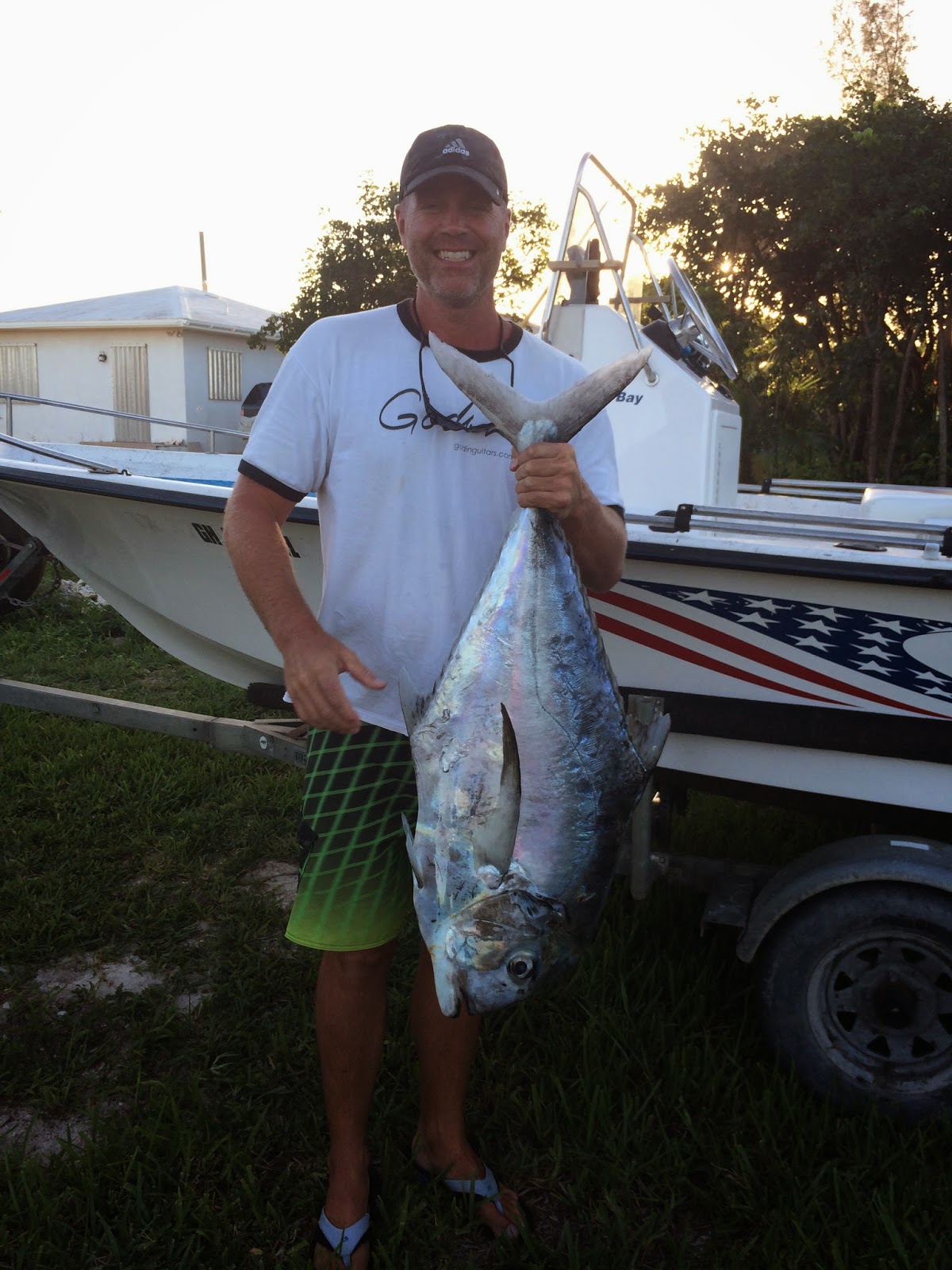 Not all fish that we, and by "we" I mean mostly Jerry, are so toothy and vicious.  This giant African Pompano swims in sharky waters a few miles away by boat.  They swim in schools and range in size, this one being a bigger specimen.

Jerry shot this one first, then had a backup spear from another fishing friend.  That's typical with spearfishing; whoever shoots the fish first, and they take turns, gets to keep the fish.  Any subsequent shots taken by others are to help with the final take down.  It's OK.  Hunting is fun even if someone else shot it first.

We got about 11 pounds of meat from this fish.  Yum. 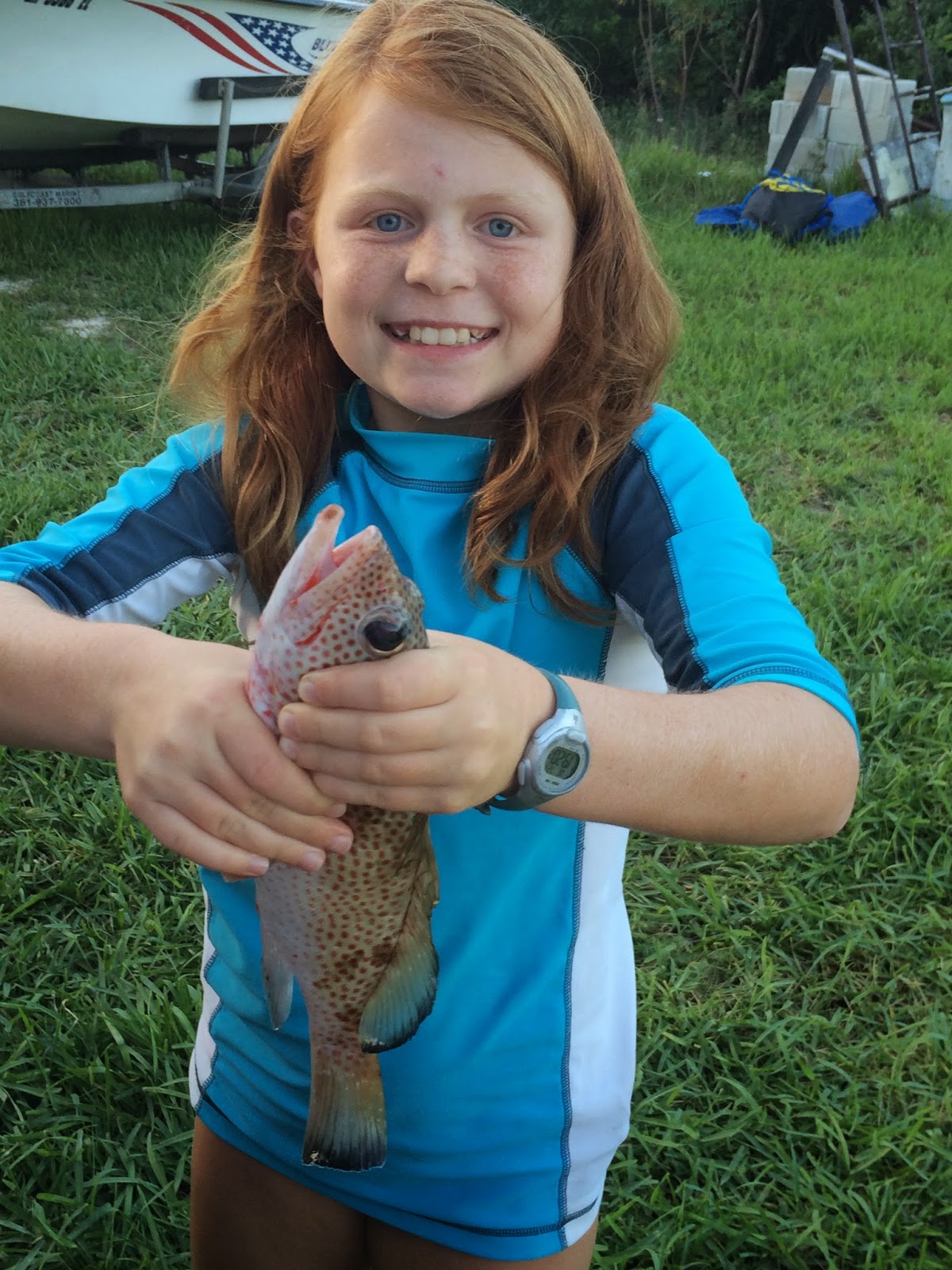 The kids are learning to spearfish, too.  Paige shot this strawberry grouper with a pole spear.  These smaller grouper are very spearfisher friendly as they are stupid and let you take repeated shots before finally going off to hide.

What's most impressive about this fish is that Paige was in probably 15-20' of water when she shot it.  And with a pole spear, you have to be a few feet away from the fish, not yards off like with a sling.  She's a pretty good darn swimmer.

Confused by all of this spear talk?  I'll post about that more later.  I'm sure you're very excited. 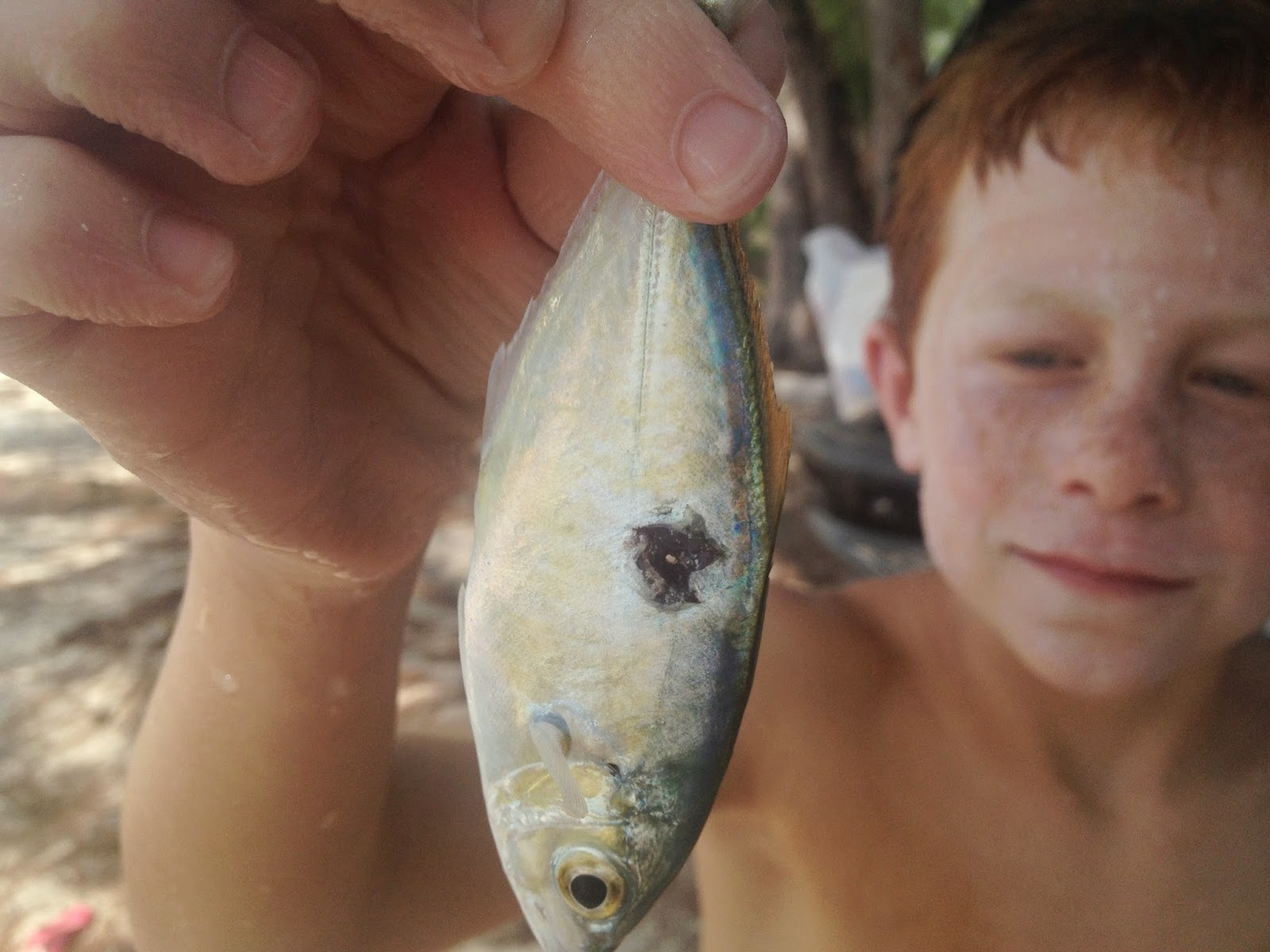 This is just one of Josh's kills.  He's pretty good at shooting flounder, crabs, lobster, and other smaller fish like strawberry grouper.  But this is a tiny bar jack he shot with a sling while practicing his aim.  (A sling is like an underwater bow and arrow crossed with a slingshot.)

Hitting a big fish is one thing, taking insane strength to shoot the spear fast enough to penetrate the scales from farther away, especially at a moving target.  But Josh shot this tiny fish from a few yards away.  AND HIT IT.  I can't even catch one with a net.

No wonder he was boy junior archery champ for the entire camp two years ago.  You would be too if you could hit the bulls eye over and over and over.

But yet somehow miss the toilet. 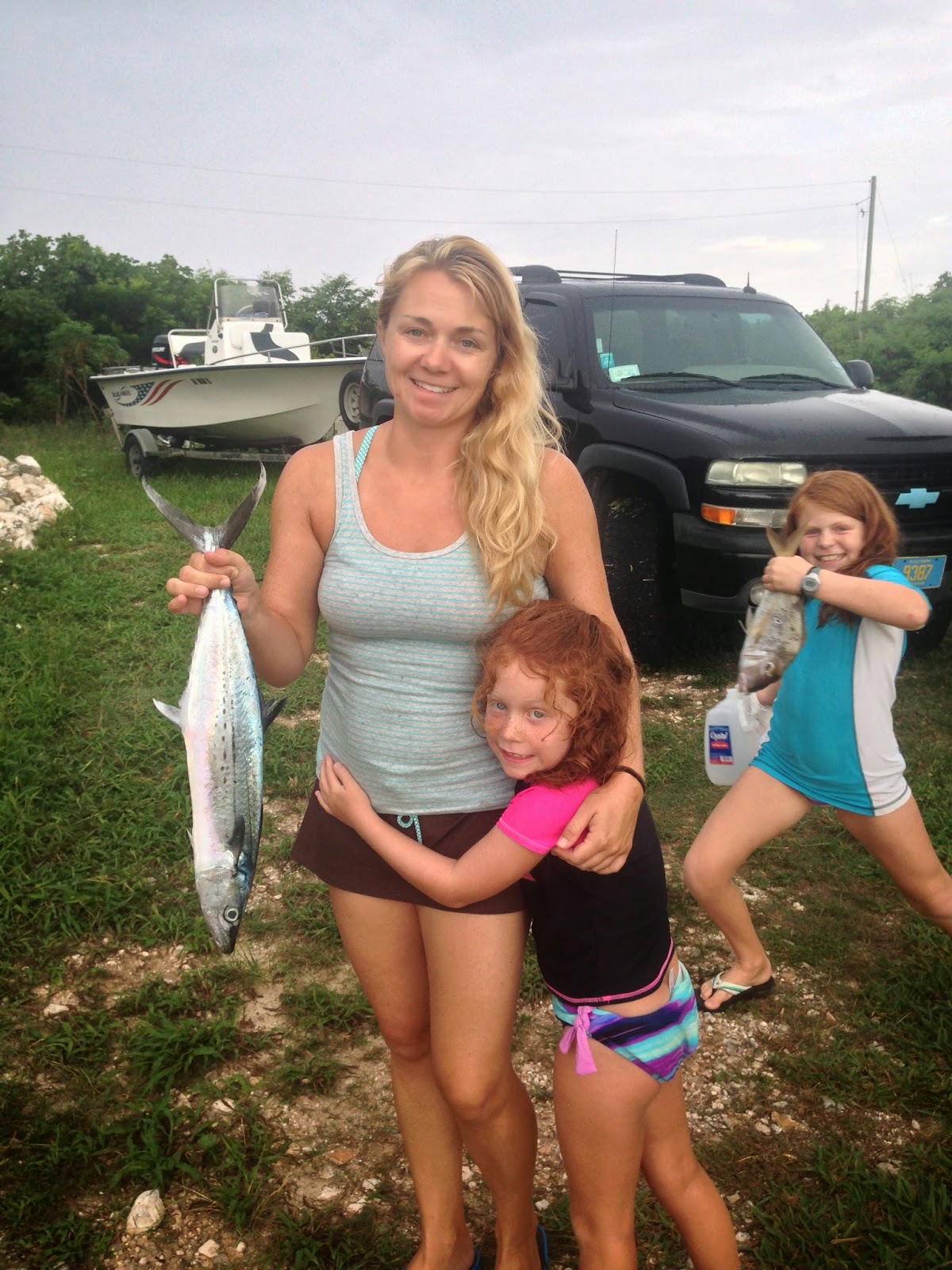 My spearfishing prowess is still developing.  I am pretty good at shooting things that don't move, like crabs, lobster, flounder, and lionfish.  My best shot was pretty cool though.  I shot a lionfish from behind as it tried to hide in a cave while it was watching Jerry and the kids swim by in the opposite direction.  It did not see me.  But I saw it and shot him from behind.  It was awesome.

This isn't a lionfish in the picture of course.  This is a mackerel that was caught on a fishing pole while trolling for fish near Cape Eleuthera.  I get credited the catch as I reeled it in.  Big whoop.  But it did taste very yummy!  (We don't eat these often, again for the high mercury content.) 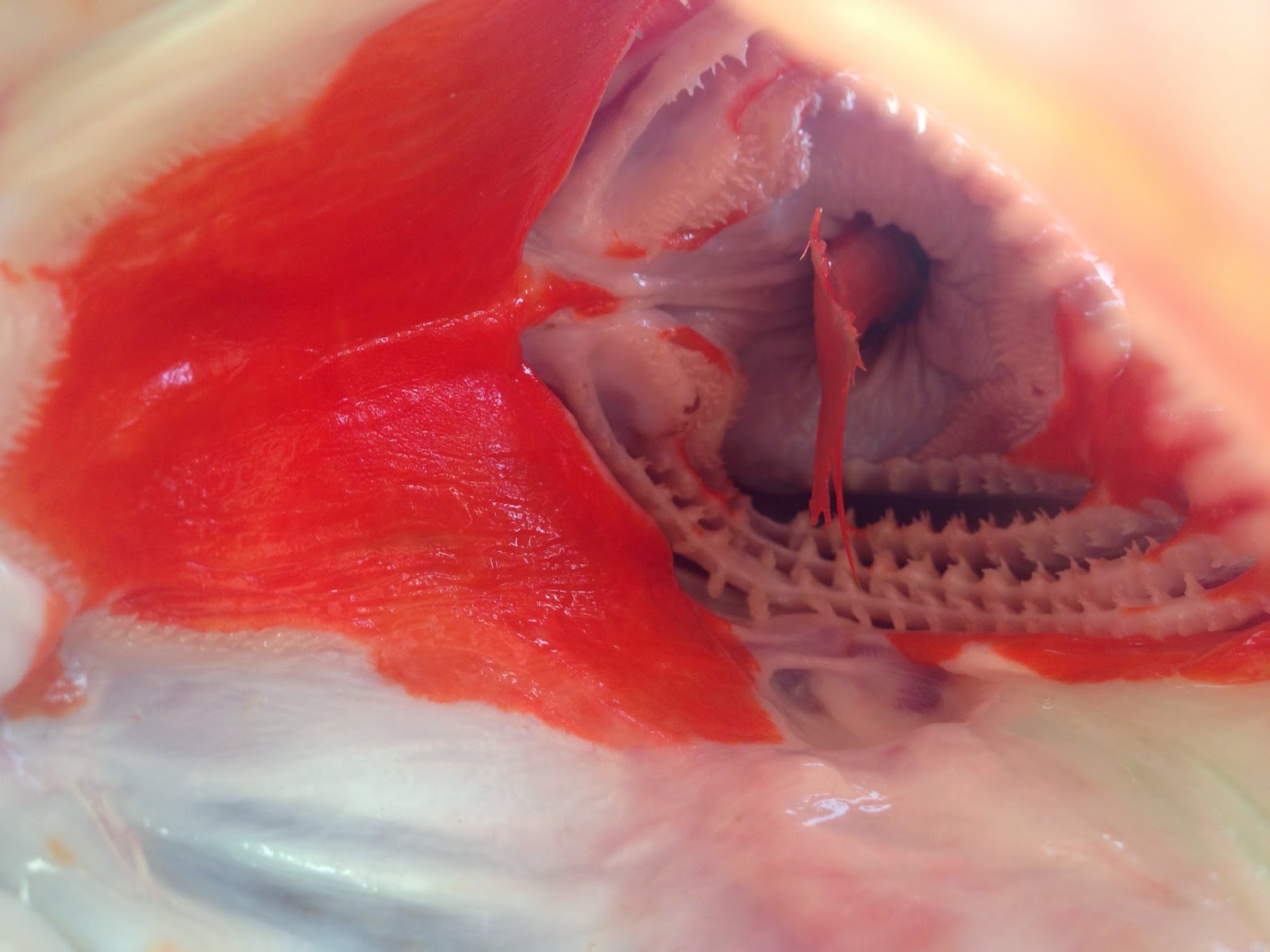 Over all, we enjoy our time spent with faces in the water and spears in our hands.  We aren't always successful, but that's OK.  Try, try, try again.

This last photo is cool.  While getting ready to fillet a grouper, the kids discovered a squirrelfish halfway down the throat of a grouper.  Jerry shot the grouper while the poor thing was trying to have his breakfast, minding his own business.

All of the ocean better beware, The Man with Spear!!