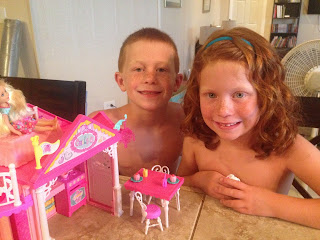 When Phoebe turned six, I decided it was time she was introduced to the magic and wonder that is Barbie.

But first, here's a bit of backstory:

Phoebe is the baby of the family, behind the oldest big sister who is the ultimate, hyper tomboy, and then a middle child brother who is also a tomboy.  Meaning he likes all things boy.

Phoebe was raised with cars, not dolls.  Going topless, not fairy dresses.  Burping and farting, not twirling and giggling. 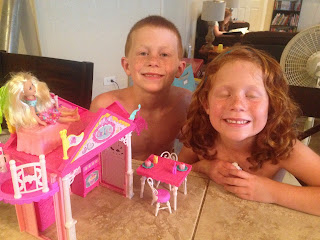 She really does like dolls, fairy dresses, twirling and giggling.  Or so I thought.

So in my infinite mom-wisdom, I advised all of the grandmas and aunts, great-grandmas and friends, to bombard Phoebe with the pinkest, most Barbie birthday imaginable.

Paige and Josh were under strict orders not to tease, harass, or make-fun of Phoebe and her Barbies on pain of loss of iPad for a month. 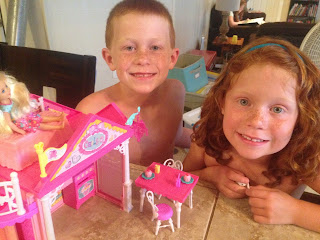 Upon opening her over-abundance of Walmart pink-aisle gifts, Phoebe was a good sport and pretended to be happy.  She delighted in assembling the Barbie car, boat, and cottage.  She dressed Barbie and the little girl Barbie chick.

It was just how I imagined it.  A little six year old, awash in the glow of pink Barbie fantasy awesomeness.

It was great.  Greatness that lasted all of 6.4 minutes.

Then Phoebe and Josh started undressing Ken and Barbie, throwing them around by their hair, and stuffing them in the Barbie convertible in all kinds of uncomfortable positions.

Can you see it?  In this last photo?  The pleading look on Phoebe's face?

"Mom, please.  No more pink.  No more Barbie.  Please get me a gun, a holster, a stuffed vulture, and a dress up costume of something only mildly cute, like a jaguar.  But NO MORE BARBIES!"

I've learned my lesson.  So this year, at least for Christmas, she personally picked out every toy and plaything she wanted online, with nary a suggestion from me.  Except that it be "Prime".

Barbie and Ken?  Get back in the bathtub nekkid where Phoebe left you.