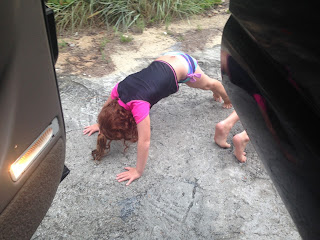 There's something about putting my kids next to each other in that backseat that turns them into maniacs.

When we're in the Suburban, with all three rows so the kids can sit 2 to one row, and 1 alone in another, all is right with the world.

But woah.  You put all three kids together on the same row, and a chasm of sibling rivalry opens and engulfs all three of them in, "She's touching me!  He started it!  Don't lean on me!  I did that so much better than you!  I can't move!  Blah blah blah, made up complaints, blah blah blah!" 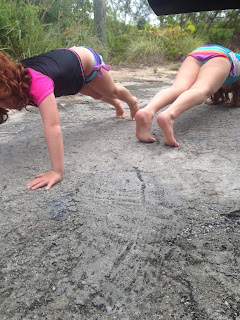 I figure my kids are lucky and unlucky.  They're lucky in that they have two loving parents who love each other, we live in paradise, have resources to live and give comfortably, and we can school from home.  They're unlucky, at least maybe in their pre-teen minds, in that we discipline and don't take too much backtalk and lip from them when they get testy and hyper.

If you've got enough energy to cause royal havoc in my backseat, both verbal and physical, you can put that overabundance to good use and get your core and chest in shape. 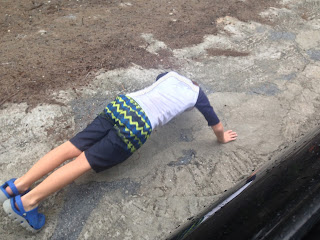 So if you see a black Suburban on a side street, pulled to a stop, surrounded by three redheads pounding out push-ups on the uncomfortable asphalt, it's just us.

Working out our problems.